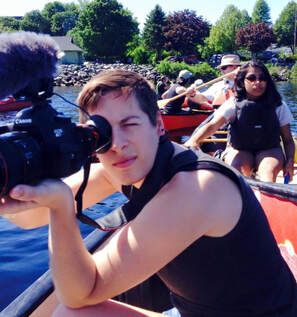 Kate Kirby is a director, producer, editor and entrepreneur. With a background in food security, environmental policy, and community building, Kirby has had the privilege of collaborating with fellow visionaries and organizers across the globe. While finishing a graduate degree in Global Policy, Kirby shifted directions to pursue the artistic side of activism, founding Kindred Planet Productions in 2013 to: “capture the interconnectedness of a 21st century world, raise awareness, and inspire change by bringing into focus stories from the margins.” She endeavors to integrate a justice-based approach to documentary filmmaking, with an emphasis on equity and inclusion at all stages of production. Her films are often described as nuanced, complex, and universal. From Bolivia, to Laos, to Wabanaki territory, to Standing Rock, to American Evangelical universities, Kirby’s projects have taken on a life of their own, evolving her as a filmmaker, and as a person.

​Angel Amaya is a Mexican-American documentary filmmaker from Corpus Christi, Texas. Angel has a BA in English from Texas A&M-Corpus Christi and an MA in Media Studies and Documentary Studies from The New School in New York, New York. She started documentary filmmaking at a young age, with local civil rights marches for immigrant rights in South Texas. During her Masters studies, she directed and produced two documentaries, 06 Female Wolf, and The World is Yours. The World is Yours premiered May 2016 in the Truth Be Told NYC film festival. She has also worked as a professional documentary film critic for the 2016 Peabody Awards. Her work in media has focused on civil rights efforts through storytelling. This is reflected in her time at Human Rights Watch, Vote Smart, Proof: Media for Social Justice and as co-founder for the Islander Human Rights Organization. Angel was most recently an associate producer on a Showtime documentary film called Beyond the Opposite Sex, which will premiere on Showtime in 2018. 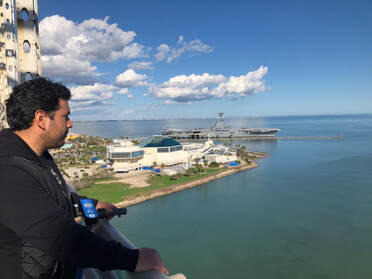 Upon receiving his BA at Texas A&M University Corpus Christi, David jumped into commercial production at the local FOX TV Station. While at the TV station he began working on his first feature film, The Violent States of America. The experience was invaluable as he gained his first co-directing, lead DP and lead editor credits.  He has since worked on various short films such as UFO GIRL and has begun writing his first screenplays. 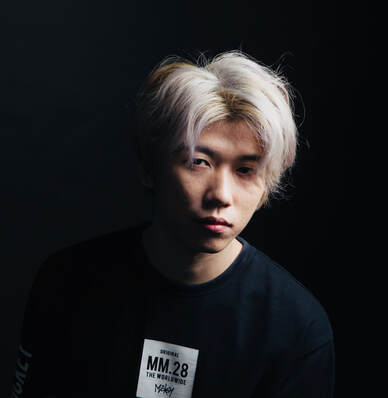 ​An explorer in visual arts, Lanchao Ji believes in the infinite possibility of moving images and narration. He graduated from The Art Institute of Chicago, with experience in several film projects and TV shows. He worked as a Production Assistant for the Facets international film festival in 2017, and was a script reader for the Austin Film Festival script competition in 2019. His script Emily was nominated in the 2018 Cosmocinema international film festival in London and won best script in 2018 Los Angeles Independent Film Festival.​

General Manager of the Greene Hill Food Co-op in Brooklyn, New York, Willa Sheikh joined the KPP team back in 2013 as Associate Director of Quinoa Soup. ​Former Director of the University of Maine Multicultural Center, Willa loves meeting new people, traveling, dancing, and conducting ethnographic research. Her work includes, but is not limited to, a series of stories documenting women’s experiences in refugee camps on the Somalia-Kenya border, and the impact of an increase in global quinoa consumption on Bolivian growers.Willa and KPP Director, Kate Kirby, met as graduate students in the University of Maine School of Policy and International Affairs, and continue to collaborate on projects combining social justice, refugee relief, and food security. 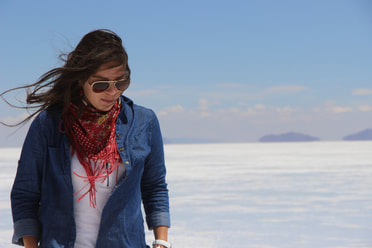 ​A graduate in engineering in Santiago, Chile, Natalia enjoys making art and traveling, with recent service projects taking her to India. An avid film connoisseur, Natalia joined the Kindred Planet Productions team for its flagship film, Quinoa Soup, which takes place in the Andes, a region Natalia proudly calls home. 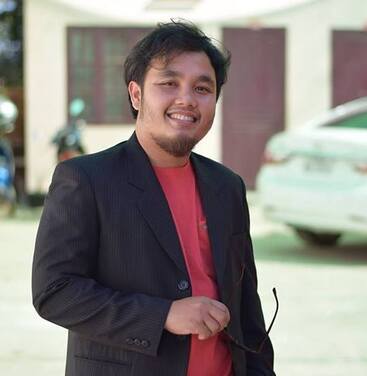 Programme Director for Dok Lao Media Service, an initiative of the Lao-founded NGO, PADETC: Participatory Development Training Centre, in Vientiane, Laos, “Ding” is a prolific filmmaker and educator. Started in 1992, Dok Lao promotes participatory media production for education and sustainable development. As program director, Ding’s key activities include: training of young Lao film makers, production of short films in collaboration with youth and volunteer networks in provinces throughout Laos, development of handbooks on film making, and the creation and dissemination of multimedia educational programming throughout Laos. Ding joined the Elephant Keeper team as a consultant in 2013, and more recently as a producer. 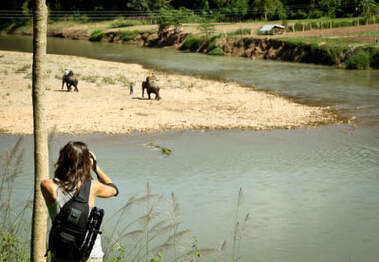 Native to Maine, Meg Webster's childhood was abundant in pine, ocean, and creativity.  Each summer, she migrated from inland to the salty coastal town of New Harbor, ME, with her parents and three sisters.  They lived together crammed in a modest sized camper, and  she believes these summers greatly influenced her creativity and artistic perspective. A lover of adventure and story, Meg has traveled throughout parts of South Asia, SE Asia, Europe, and Central America. She's worked as an English Instructor to International students, a Youth Counselor to at-risk youth, and continues work in freelance photography and film.  She joined Kindred Planet Productions in 2013 . 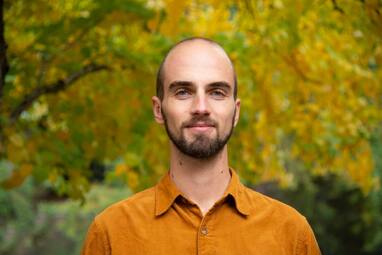 Graeme Aegerter is a documentary filmmaker, photographer and fundraising professional based in Los Angeles, CA. He is passionate about using storytelling and the arts as tools for social justice and community engagement. His first film, Daughters of Emmonak, premiered at the Big Sky Documentary Film Festival and was used by the United States Department of Justice for internal trainings on sexual violence. He co-produced the feature documentary A Gentle Magic (official selection of the New York African Film Festival & Afropunk Fest Johannesburg), and he is currently producing a feature documentary about a Maasai woman fighting against female genital mutilation and child marriage in Kenya. He designed and co-managed a national social impact campaign for the film, engaging hundreds of community members through screenings, and raising over $20,000 for their partner NGO. Most recently, he served as the Impact Campaign Coordinator for the award-winning feature documentary Roll Red Roll. Beyond making documentaries, Graeme loves camping, dancing, climbing trees, live music and eating tortilla chips as if his life depends on it. 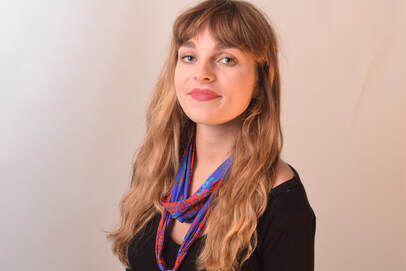 Annie Kuhn is a filmmaker and video editor from Columbus, Ohio. She received her BFA from Columbus College of Art & Design in Film and Video studies. Her work has consisted of video art installations within her community, interactive video projections, and creating/hosting local film festivals. When she is not working she enjoys collaborating with other filmmakers, playing the piano and traveling when possible. 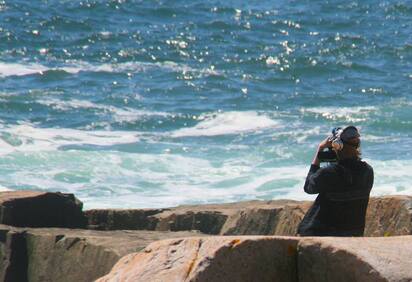 ​Versed in the ways of web design, programming, database structures and image composting, Thomas prefers to focus on the video section of new media. A graduate of the University of Maine, Thomas has worked in media production for Maine EPSCoR, and Maine Media Workshops + College, and is a self-proclaimed: "rather blatant video game nerd".